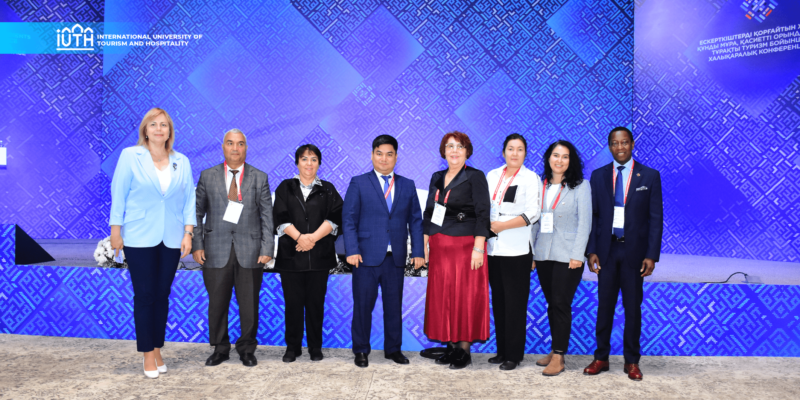 Today, the International University of Tourism and Hospitality of Turkestan hosted a panel session “International cooperation of educational institutions in the field of sacred tourism”, organized within the framework of the International Conference on Sustainable Tourism, Pilgrimage and Sacred Heritage: People Protecting Monuments.

The purpose of the international conference is to review the experience of Kazakhstan in terms of the development of cultural and historical landscapes and sustainable tourism associated with World Heritage sites, as well as to present the best world practices for the conservation of World Heritage sites and attract the international expert community to the study of the Mausoleum and intangible heritage of Khoja Akhmet Yassawi.

The panel session discussed a fundamental revision of approaches to the development of tourist areas, services, new standards in the hospitality industry, as well as the development of new routes, excursions, retraining of guides and instructors, digitalization and tasks to promote the tourism potential of our country.

Opening the session, the moderator, Chairman of the Board -Rector of the International University of Tourism and Hospitality Aidos Sakenov warmly welcomed all participants and guests of the Conference, noting the special role in the development of tourism of the exchange of experience with international and Kazakhstani educational institutions, as well as profile experts. “Currently, the University has cooperation agreements with such educational institutions as Amity University (Dubai), The Emirates Academy of Hospitality Management (UAE), Changdu University (China), The Institute of Tourism and Hotel Management (Austria), The Taylor` s University (Malaysia), Antalya Bilim University (Turkey) and others.  The University’s cooperation with international organizations such as UNESCO and UNWTO is a common thread. The interaction of the University with the above international organizations, with the most authoritative Swiss schools of hospitality and management in the field of hotel business Les Roches and SHL, as well as the opening of the UNWTO Center under it, will allow the University not only to become a leader in the region, but also the third such educational Center in the world after Portugal and Spain,” said Aidos Sakenov.

The coronavirus pandemic, which took the world by surprise in 2020, has made its own adjustments in many areas of people’s lives, including tourism. Hurriet Ersoy, Adviser to the Minister of Culture of Turkey, raised issues of the state of tourism after the pandemic at the session and focused on the development of sacred tourism in Turkestan, following the example of Pilgrimage tourism in Turkey. In Turkey’s projects aimed at the development of religious tourism, in 1993, an inventory of temples and properties of three major religions that have survived to this day was prepared. These places have been included in tourist programs by tourism agencies. According to this project, a committee has been created that works in all areas of tourism, consisting of government representatives of the Ministry of Foreign Affairs and the Ministry of Internal Affairs.”

In his speech, the Dean of the Faculty of the Azerbaijan University of Tourism and Management Bahadur Bilyalov spoke about religious tourism in the Republic of Azerbaijan: “The development of multiculturalism, tolerance and religious tolerance in Azerbaijan at the level of state policy is based on the ancient history of the statehood of the country and on the development of these traditions. At the end of the XXth century, owing to the efforts of the national leader Heydar Aliyev, this political behavior took the form of the ideology of statehood, the traditions of tolerance and multiculturalism were restored.”

M.S. Narikbaev KAZGUU University pays special attention to spiritual and patriotic education, the formation of national, cultural and moral values among students. In order to comprehend the educational material, students take part in historical and tourist excursions to the sacred places of the Motherland and are completely immersed in the historical situation of certain periods of the history of Kazakhstan in various regions of the country.

“During the implementation of historical trips, students have visited almost all regions of the country: from Zhidebay in the east to Aktau (Beket-Ata) in the west, from Burabay in the north to Turkestan in the south. Thus, students get the opportunity to get in touch with the past and feel like a part of the great heritage of their ancestors,” said Lepuda Mukataeva, Candidate of Historical Sciences, Professor of M.S. Narikbaev KAZGUU University.

Sacred tourism is one of the oldest and, at the same time, one of the newest types of tourism. Sacred tourism is understood as spiritual and ecological routes and tours to sacred places, with visits to religious and archaeological sites (mounds, megaliths, rock paintings, kereskurs, temples). Bakhytkhan Orazymbetova, Member of the UNESCO National Commission of the ICH, National Trainer of the World Federation of Tourist Guide Associations (WFTGA), raised the issue of sacred tourism and the training of future specialists on this topic: “One of the strategic directions for the development of the economy of our country at the present stage is the organization of domestic and inbound tourism. It is clear that in this regard, the professional preparedness of tour guides and guide-interpreters, the basic figures of excursion activities, is especially relevant. Excursion activity is a special type of professional activity, which must meet a certain set of requirements. An indicator of the preparation of such a specialist is the degree of his pedagogical skill since the guide usually acts as a teacher, carrier and repeater of some knowledge in relation to the excursionists.

In turn, Irina Shestitko, the director of the Institute for Advanced Studies and Retraining of the Belarusian State Pedagogical University named after Maxim Tank, acquainted the listeners of the session with tourist routes for the development of the cultural and spiritual heritage of the Republic of Belarus and spoke about historical places. “Belarus entered the chronicles of the largest wars in world history. At present, you can visit the places of famous battles and great tragedies of different times, honor the memory of the dead of many nationalities, take part in historical festivals and reconstructions,” said the guest from Belarus.

Gulnoza Usmonova,  Director of the School of Tourism and Hospitality of the Singapore Institute for Management Development in Tashkent, spoke on the topic “Perception of the level of sacral and pilgrimage tourism development among the youth of Uzbekistan”.

“With a view to preventing the exodus of qualified personnel, developing countries must first improve the image of their country for its inhabitants, especially for young representatives. In this case, tourism can help greatly to make Uzbekistan more attractive for young people to stay or return. However, it cannot completely eradicate the socio-economic framework that leads to youth migration. Governments should accept favorable conditions for youth,” Gulnoza Usmonova said.

In addition, Gulzamira Aitbayeva, Candidate of Philological Sciences, Associate Professor of Abylai Khan Kazakh University of International Relations and World Languages, focused on the problems of the current state of sacred geography, cultural and geographical heritage of Kazakhstan and the prospects for their development in the tourism market of the Republic of Kazakhstan in the context of modernizing the modern consciousness of society. “Exploring the historical, cultural and tourist potential of Kazakhstan, technological maps of tourist routes for sacred sites of Kazakhstan were developed based on the use of technology for designing and organizing a tourist trail. Furthermore, the zoning of Kazakhstan territory was carried out according to the potential for the sacred tourism development. Understanding the special specifics of sacred tourism makes it possible to separate sacred tourism from pilgrimage,” said Gulzamira Zholdasbekovna.

In turn, Aniset Gabriel Kochofa, the President of the International Youth Institute (Tashkent, Uzbekistan), spoke about the new horizons of the digital world: “It is important to look at tourism and cultural heritage through the prism of youth and digitalization. The tourism development and the cultural heritage preservation should be directly related to the interests of young people and digital technologies.”

At the end of the session, the parties signed a memorandum of cooperation between the International University of Tourism and Hospitality of Turkestan and:

After the signing ceremony, the parties expressed their readiness for close cooperation within the framework of the Memorandum and wished each other fruitful work, as well as success in achieving their goals and objectives. 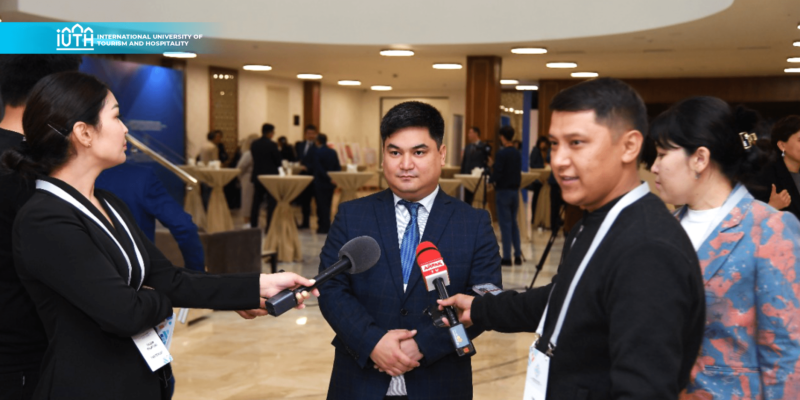 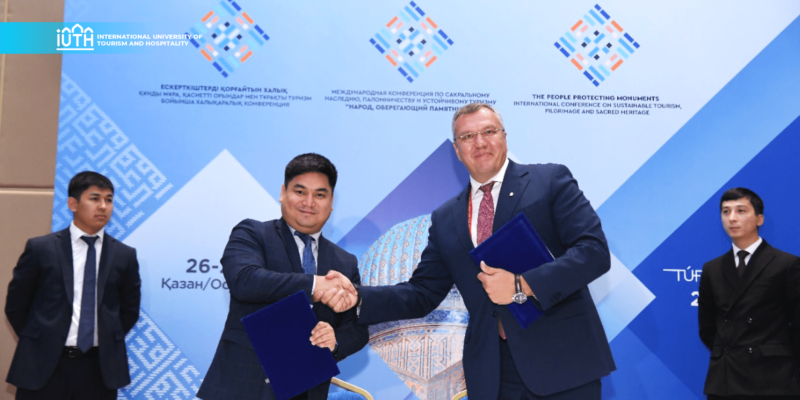 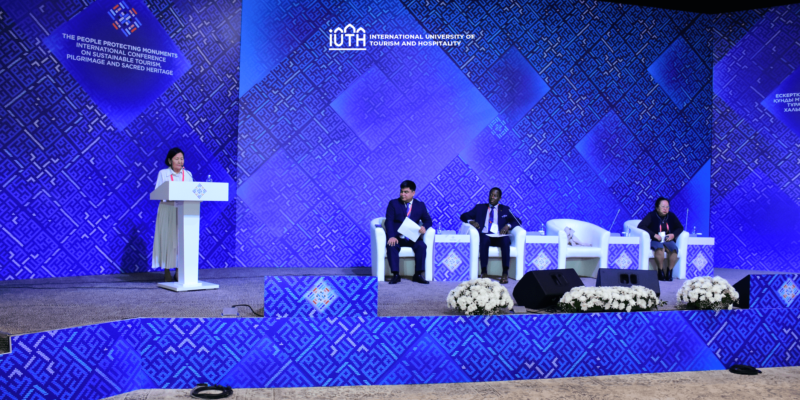 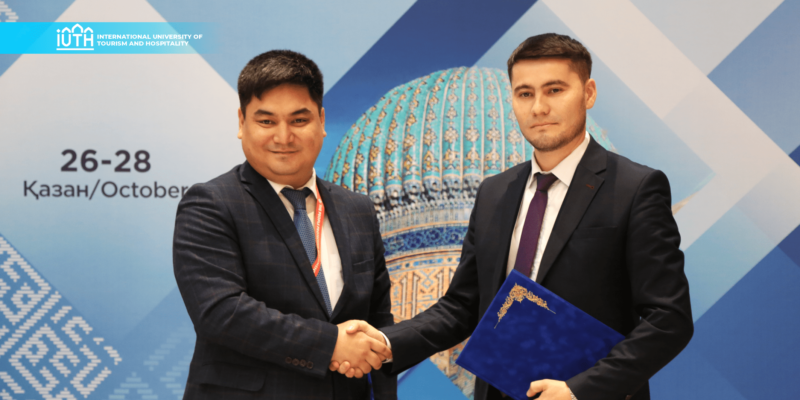 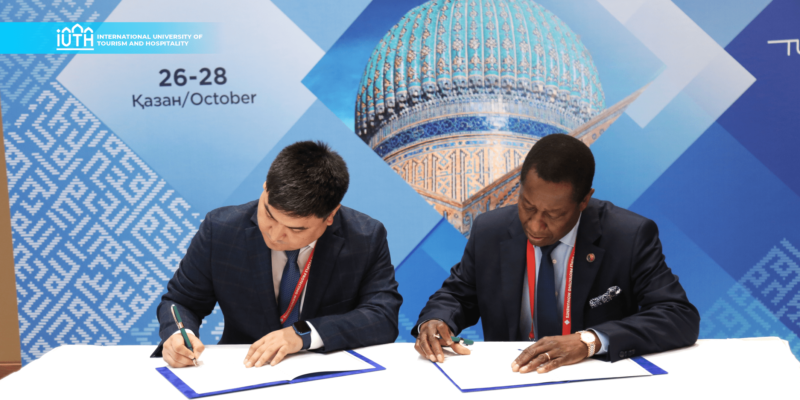 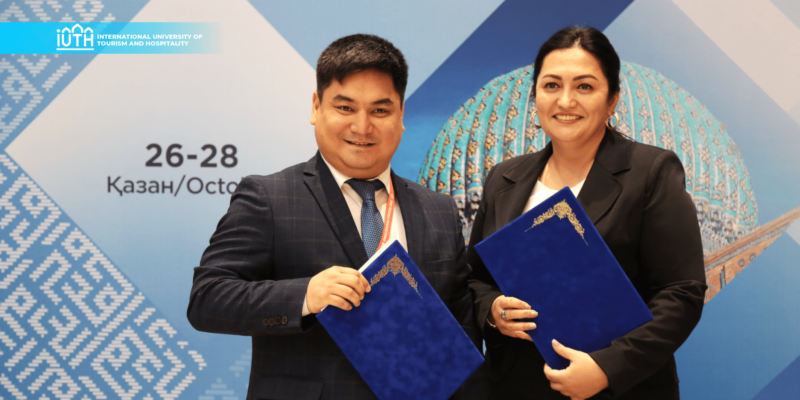